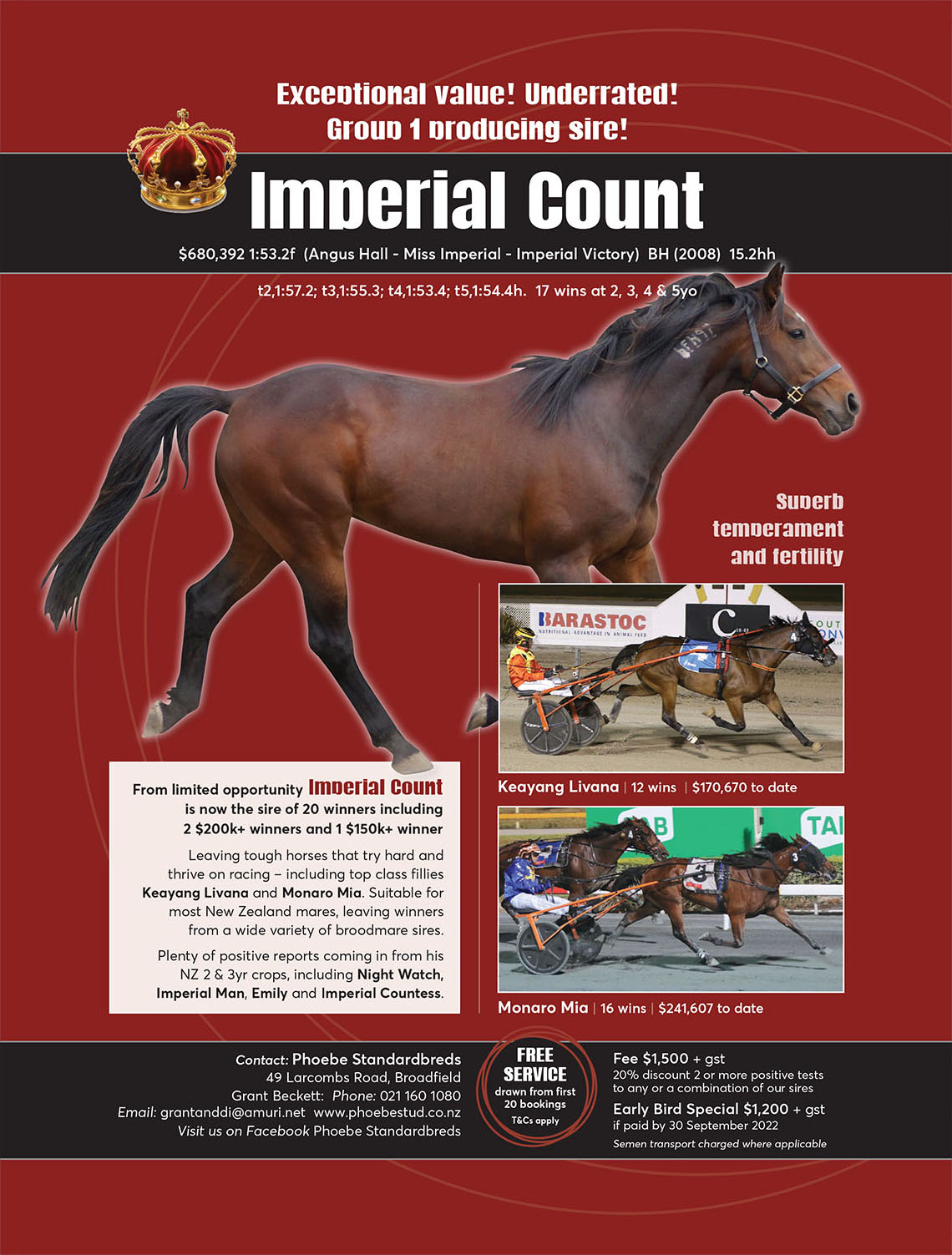 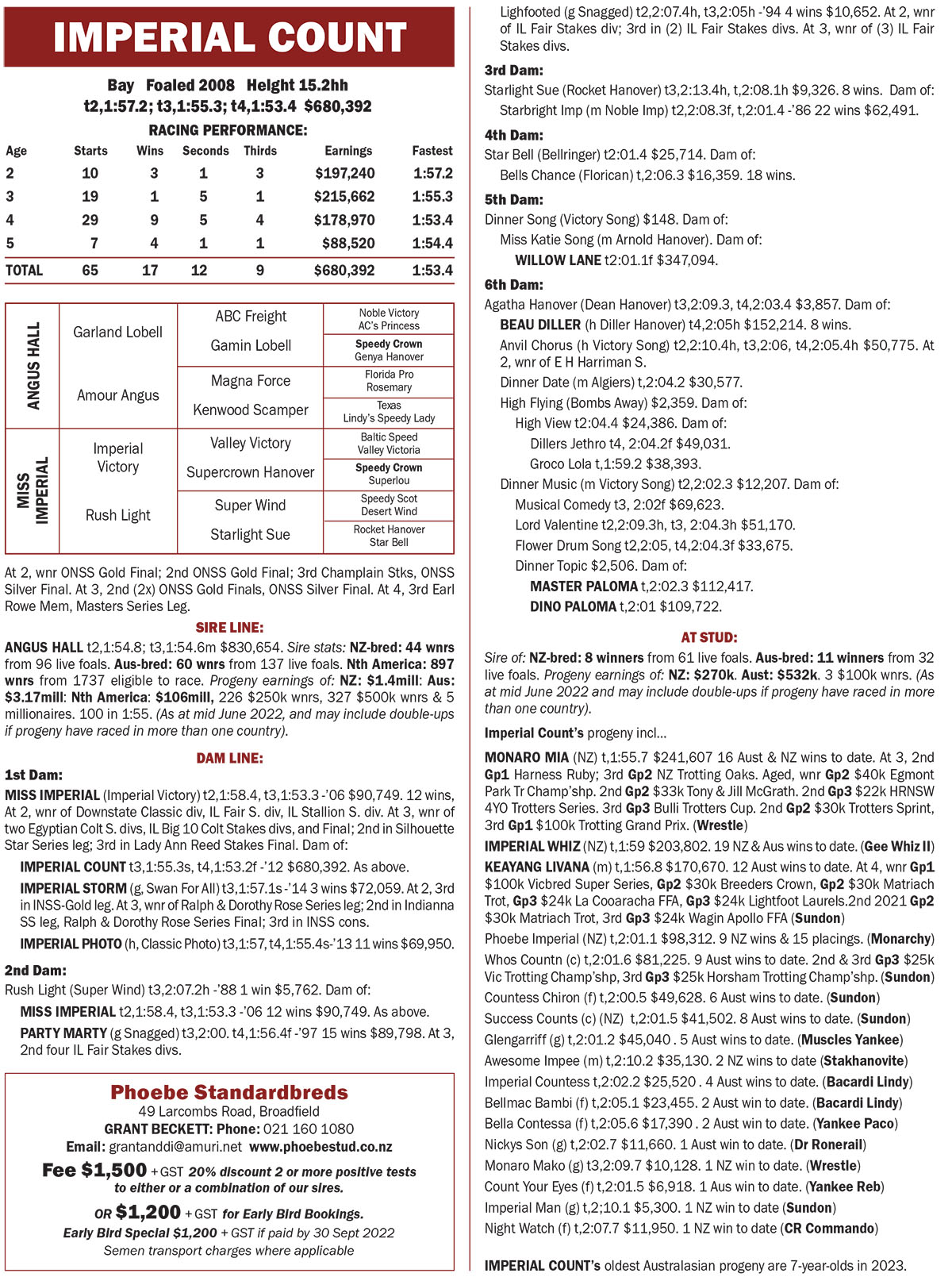 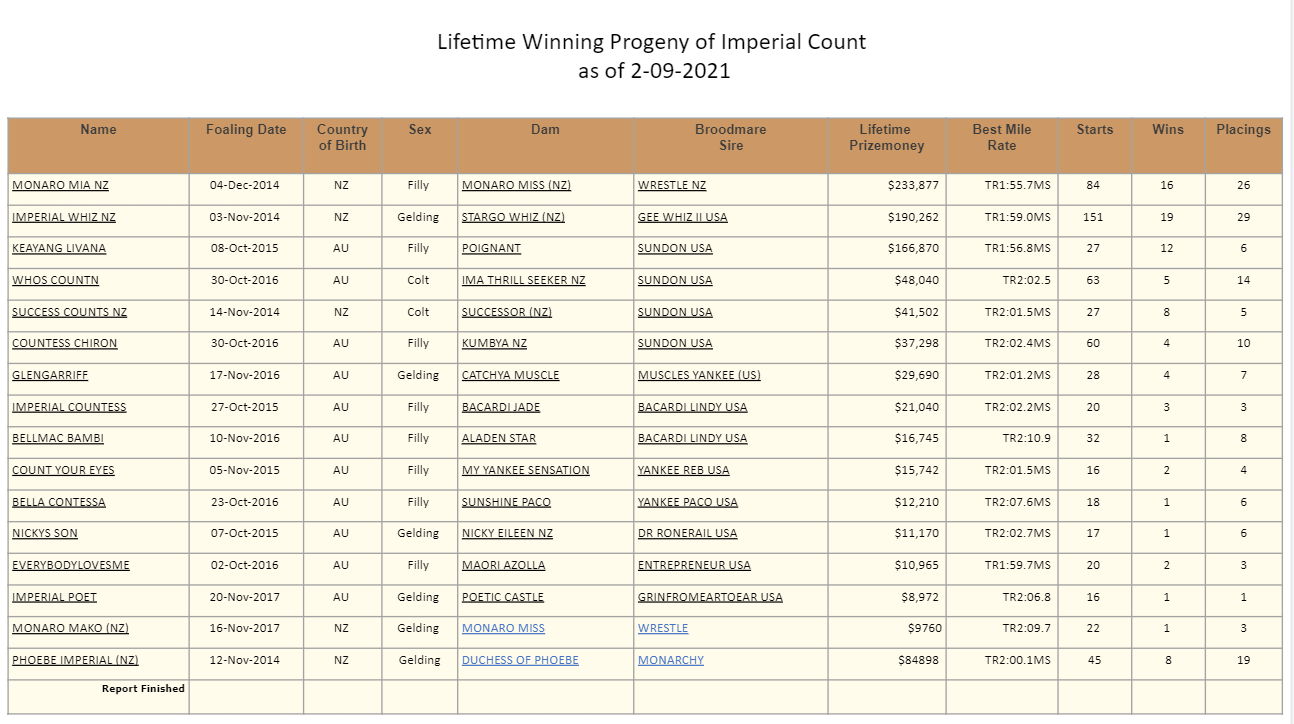 Group 1 Glory for Imperial Count and the "Wee man."

Back at the beginning of the new millenium I worked for a couple of years (2002 + 2003) at the fledgling Standardbred stud, Linden Park, Pukekawa, where stallions stood such as Sands A Flyin, Road Machine and others the likes of Tuapeka Knight, Hitchcock, Butler's Reward and even a trotting stallion in Bellam.

Whilst each was competitive as a racehorse, none were deemed highly Commercial or stallion's to consider for breeding Yearling Sales prospects.

At an early date Sands A Flyin did have a few cracking racetrack performers in Sly Flyin and Sparks A Flyin to be followed by Monkey King but still these super horses were not enough to see any sort of flow of Commercial broodmares, let alone any significant increase in numbers, either coming through the gates of Linden Park or via increased off-farm semen transportation.
Commercial stallion's were the realm of the big Studs largely because of their ability to grapple with the costs of shuttle stallions and the latest and greatest bloodlines from North America.

The so-called "little players" or "Wee man" as Grant Beckett aptly puts it, were left to pick up on domestic stallions (Grant has two currently in Royal Aspirations and Locharburn) or discarded shuttle stallions looking for re-homing.

"Breeding to race" was essentially their place in the market and "lesser" mares the norm.

So it came as no surprise when Grant & Di Beckett from Phoebe Standardbreds burst into print last week on their Facebook page admonishing racing journalists and reporters alike for the lack of any acknowledgement or story regarding the Group 1 success on 31 December 2020 of Imperial Count's highly progressive daughter Keayang Livana in the Vicbred 4YO Trot Mares Final at Tabcorp Park in Melton, Victoria,in an impressive 1:57.8 mile rate and in the process providing her sire Imperial Count with his first Group 1 winner.

I can fully understand and empathise with this claim having worked at Linden Park and facing a similar situation with stallion's not considered Commercial.

Bosses like Graham Bell at Linden Park and Grant Beckett at Phoebe Standardbreds must become so frustrated when they face the question of "What could be if only their stallion's could be given the opportunity with a bevy of better bred or Commercial mares?" It always leaves the big question unanswered and therefore highly frustrating and in the case of Graham, forces them out of the game in sheer despair.

Good on Grant and Di hanging in there, with sheer passion, but for how long?

A horse such as Keayang Livana ignites this passion and keeps it fuelled for a good deal longer. For her sire Imperial Count it has happened at the right time to provide future hope.

Her victory in the Group 1 Vicbred 4YO Trot Mares Final made it 4 wins in a row for this exciting new talent having been preceded by two Group 2 victories in both the Breeders Crown 4YO Trot Mares Championship and the IRT Australia Matriarch Trot.

Keayang Livana now has 10 wins from just the 21 starts having already bankrolled $130,930 with the promise of a whole lot more to come.

There is no doubt that a lot of her "genuineness" can be attributed to her sire Imperial Count who was just that himself as a racehorse, being one of the fastest and richest sons of Angus Hall, a Noble Victory-line legend.

With such a strong damline, racetrack performance and tracing back to legendary matriarch Minnehaha, Imperial Count possessed the right credentials to become a successful sire.

His own dam Miss Imperial won 12 races at 2 and 3 years old, taking a record of 1:53.6 with three of her foals being sub 1:58 performers whilst granddam Rush Light left 4 winners from 5 foals and great granddam Starlight Sue left 4 winners from 8 foals.
Arriving late into New Zealand during the 2013-14 breeding season to Jonathon McNeil's Barra Equine Stud in Canterbury, Imperial Count served only 15 mares in what proved to be a rather truncated breeding season.

In an ironic twist, having been returned to New Zealand for the 2016-17 breeding season, Imperial Count's sons and daughters have been "on fire" in Australia in recent times.

Apart from Keayang Livana, his flag has been consistently waved by his sons and daughters the likes of Monaro Mia, Countess Chiron, Glengariff and Who's Countin. You will hear a lot more of these names in the months and years to come simply because they are so genuine, just like their father was on the track.

From 2016-17, Imperial Count has served books of 3, 17, 24, and 15 in the 2019-20 season so has struggled to gain any real Commercial appeal from his new Canterbury base at Phoebe Standardbreds but now that he has proven he can leave a Group 1 winner off the back of very low numbers we hope New Zealand trotting breeders will take notice of the fact that Imperial Count "has kicked a Stephen Donald like goal" as a springboard to his future stallion career being still only a relatively young stallion at just 12 years of age.

The last-mentioned of this list has a dam by pacing sire Grinfromeartoear but it comes as no surprise to us here at Premier Pedigrees that this blood has "nicked" with Imperial Count's bloodlines.

And here is where New Zealand and Australian breeders of trotter's should take note.

Grinfromeartoear's pedigree is full of lines of the grand old matriarch, Spinster. Some refer to her as being the "Queen of Matriarchs". And there are bountiful trotting mares out there that hold the presences of Spinster's sons and daughters, Light Brigade being one that readily springs to mind.

Breed them to Imperial Count and you may just get a pleasant surprise for your very modest outlay (currently standing at NZ $1500+gst ),

Why?, do you say. The answer, we say, is because of the common genetic denominator that exists.

Spinster is tail female to Minnehaha. So too is Imperial Count!!!

In the case of Imperial Poet (out of a mare by Grinfromeartoear), the blood of Minnehaha (via Spinster and her tribe of descendants) is being returned to Imperial Count's very own line of direct maternal descent which also traces directly to Minnehaha.

And if you are a follower of effective breeding techniques, you will be aware that returning this same good blood from your mare to the stallion's "bottom line" is a well-recognised and practised breeding formula (used in both equine codes) for the creation of speed enhancement.

A high value stallion at a rock bottom Stud Fee shapes Imperial Count as a stallion promising an excellent return on investment as well as giving the "Wee man" with a passion for the sport, a helping leg up.